#ISAngKilosBayan: Aspiring for What the Filipino Deserves

With only six months away from the 2022 national elections, a series of head-spinning, political machinations in the Philippines are in full swing, leaving millions of watchful Filipinos intrigued and on the edge of their seats.

While the presidential front-runners have recently been grabbing the spotlight, the Filipino people remain to be the top priority and concern in this grand season of change. In its most recent episode under the #ISAngKilosBayan Advocacy Series, the Institute for Solidarity in Asia (ISA), in partnership with Philstar.com, unlocked the true essence of the 2022 national elections by identifying the needs, concerns, and expectations of Filipinos from the government and the future leaders to come. 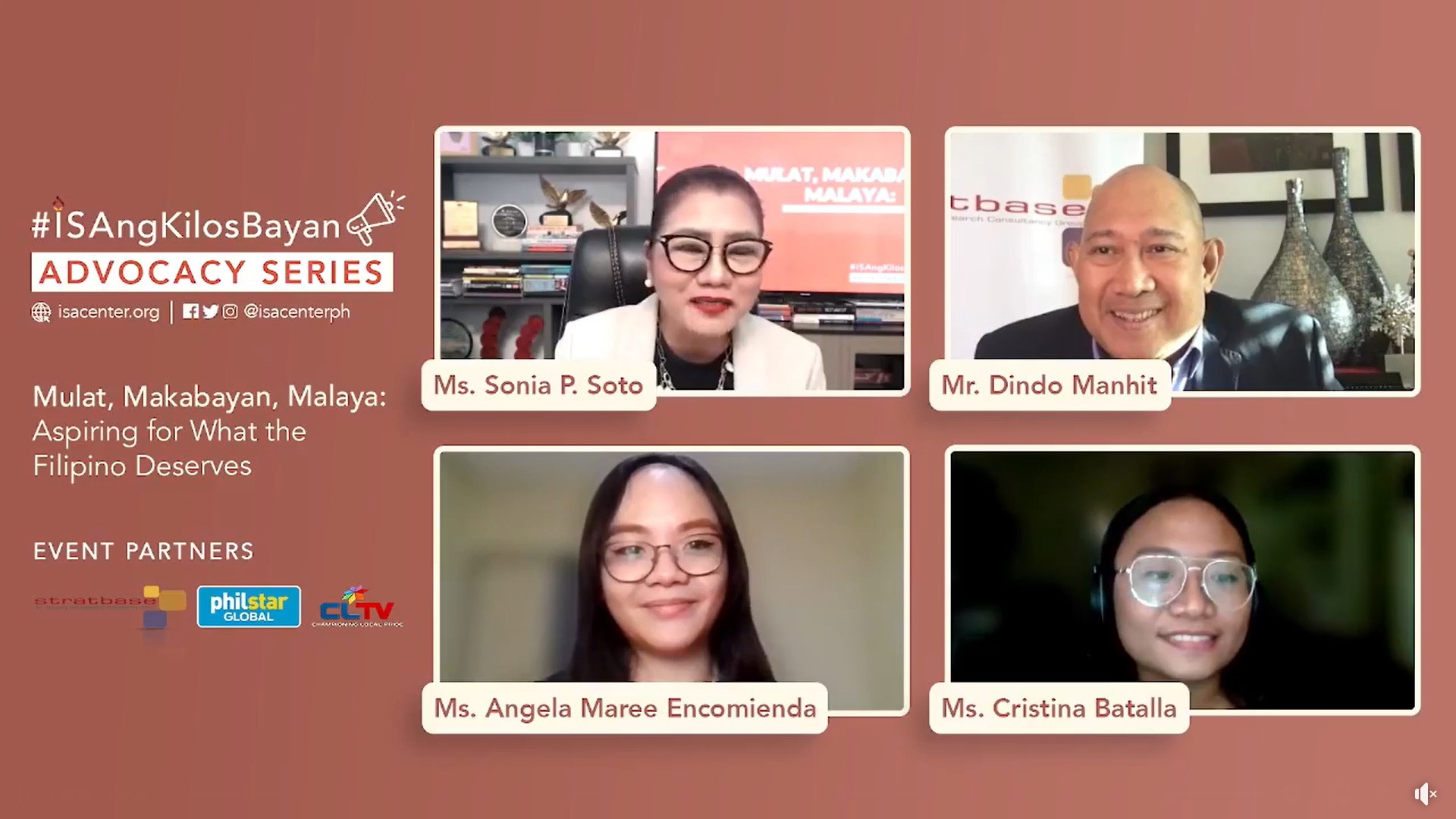 Moderated by seasoned broadcast journalist and one of ISA’s Associates, Ms. Sonia P. Soto, the webinar featured Mr. Victor “Dindo” Manhit, Founder and Managing Director of Stratbase Group, a research and strategic advisory consultancy firm. He is also the President of its policy think-tank, Stratbase Albert del Rosario Institute for Strategic and International Studies, and is regarded as one of the country’s best advisors on developments in government and business.

According to the 2019 Election Data of the Commission on Elections (COMELEC), the Philippines has a total of 61,843,771 registered voters, with 45% coming from Luzon, 23% from Mindanao, 21% from Visayas, and 11% in the National Capital Region.

In terms of their socio-economic status, it was revealed that 14% of electorates belong to the poorest of the poor, while the majority (75%) belong to Class D, a segment of the population that Mr. Manhit describes as, “gipit”, or people who earn less than their needs, primarily due to limited education.

“Elections in the Philippines are shaped by people living in Class D. They shape the result of the elections. Economists will say [that] they are people living in relative poverty, people with work and income, but income is not enough,” he said.

While reports say that the country has a “young voting population”, Mr. Manhit argued that “young doesn’t necessarily mean new voters”, but refers to first-time voters.

Issues and concerns of the Filipino Voter

Nearly two years after the onset of the pandemic, the Philippines remains to be one of the many countries that continue to struggle in containing the COVID-19 virus. The global health crisis, coupled with the “confusing lockdowns and confusing ECQ, MECQ cycle”, has created “so much suffering for the Filipino, according to Mr. Manhit.

In a Social Weather Stations (SWS) conducted in October, Filipino voters identified issues that they think should be addressed by candidates running for national positions in May 2022.

“Four out of five [issues] are economic in nature. Prices of basic services or commodities, jobs, trabaho o kita, [and] kahirapan. In between them is eradicating graft and corruption,” Mr. Manhit reported.

Meanwhile, when asked in a survey with Pulse Asia last September what their top personal concerns were, Filipino voters indicated health to be a top concern while second and third are “secure source of income” and “have enough to eat every day”, respectively.

Following the previous topics of concern, Stratbase, in partnership with Pulse Asia, asked Filipino voters to rate the government on its performance in addressing national issues between November 2020 and February 2021. Mr. Manhit said that the continuous rating decline reflected the people’s frustration on their top concerns, most especially on the “integrity of Philippine territory against foreigners”.

“It’s quite sad that less than 50% of Filipinos feel that we are defending the integrity of Philippine territory against foreigners. But graft and corruption—this was the biggest decline we saw from June to December. [There was a] 12% decline on the way the public—across demographics all over the country, male and female, urban and rural—sees that government seems to be failing in their fight against graft and corruption,” he said.

“This is not a good situation for a country going into an election year. When the public is burdened with economic challenges and even with lack of confidence with regards to their government,” Mr. Manhit added

“With so much resources of the government being mentioned in the news, with laws being passed saying that allocations of people’s taxes should be allocated in the ayudas, people still feel hungry and poor,” he highlighted.

Filipino voters in the 2022 national elections

Despite all the aforementioned issues and type of Filipino voters, data shows that 91% of the public are still reportedly ready to vote. But as an advocate of strong democratic values, Mr. Manhit shared that his greatest fear is the possibility of voter oppression.

In his opinion piece on Businessworld in October, Mr. Manhit said that “the Filipinos’ commitment to democratic survival is absolute. We must reject any attempt to weaken or subvert our democratic system of succession and uphold our democratic institutions at all costs.”

With all the political heavyweights recently making headlines, an SWS survey in October showed that the characteristics that Filipino voters look for in a candidate running for national positions must: 1) have concern for the poor, 2) be honest and trustworthy, and 3) be not corrupt.

“It’s a reality that when [the] majority of people are poor, o gipit o hirap sa buhay, people will say that ‘we are looking for a candidate that has honest concern for the poor’. Someone that they can trust, someone that is not corrupt.

“Let’s demand this. Let’s not keep it to ourselves. We should ask this on [sic] our candidates for national office. What will you do to the burdens being carried now by  the Filipinos with life getting worse because of the pandemic,” Mr. Manhit said.

Role of the youth

The pandemic saw the rise of many youth organizations, which reflected the drive and passion of the new generation in addressing social concerns. For Ms. Batalla, the youth has a critical and crucial role in the path to recovery and further communicating the needs of Filipinos.

“We have greater resources to organize right now. It’s no question that the youth has a role in recovering from the pandemic. We have the power to use our existing power to utilize online platforms. The youth are great at innovating and making sure information and opportunities are more accessible,” she said.

Ms. Encomienda echoed the sentiments of Ms. Batalla, adding the need to develop an electoral agenda recognized by the society.

“Youth are the ones adept in navigating the digital space. We could be some of the leading actors in digital space habang isolated tayo ngayon at ongoing ang pandemic. May critical role ang youth in going beyond just identifying what we are going through. We also need a platform to craft an electoral agenda hindi lang recognized among us pero sineseryoso ng buong lipunan,” Ms. Encomienda noted.

With the rise in conflict among the supporters of key contenders for the 2022 elections, Ms. Batalla reminded the viewers to instead keep their eyes on the nation’s ultimate goal—progress.

“There’s no such thing as bobotante. Filipinos are not ignorant. We are smart. As voters, as people, let’s continue creating safe spaces for dialogue and conversation on the things that matter to us. Second, let us also pay attention to local elections. Third, look towards the future. We’re focusing on elections now, but making changes does not end with the elections. There’s so much more that we citizens can do to push for reform. Let’s keep pushing for progress, manalo man o matalo man ang mga kandidato na gusto natin,” she said.