Cities, perceived as the centers of growth and innovation, have found themselves at the center of the COVID-19 pandemic. Home to the majority of any country’s population, urban areas became the ground zero for transmitting emerging human infectious diseases.

While the ongoing pandemic continues to expose the vulnerability of cities in terms of resources, it also offers the opportunity to transform, innovate, and prepare our cities for future crises. In partnership with Philstar.com, the Institute for Solidarity in Asia (ISA) held an all-new episode under its #ISAngKilosBayan Advocacy Series on October 20 to define liveable cities amid a pandemic-stricken world. ISA gathered distinguished public servants, namely Mayor Maria Isabelle “Beng” Climaco (City of Zamboanga), Mayor Jerry P. Treñas (Iloilo City), and Mayor Krisel Lagman-Luistro (Tabaco City, Albay), to share their experiences, realizations, and plans in moving their respective communities toward a brighter and liveable future. 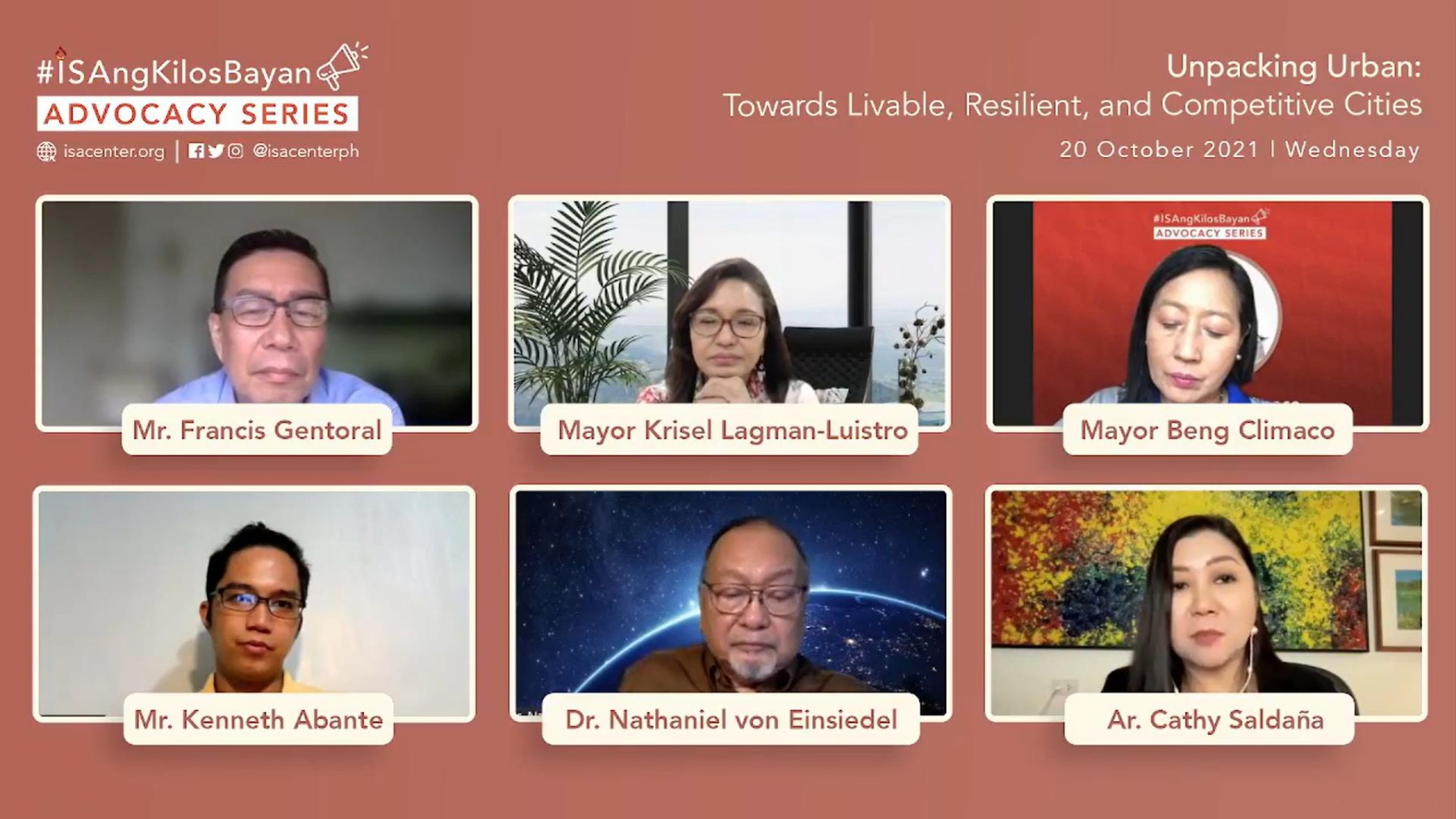 A liveable city has been defined in various ways by urban experts, and is often linked to sustainability, green spaces, general safety, among others.  But for Mayor Climaco, a liveable city is simply a city that allows its citizens to “fully breathe”.

“The pandemic has really taken us back in the plans that we have, but [a liveable city] is really a city that is able to provide the capacity of S.H.E.—security, health, and education. A liveable city, in the light of pandemic, is a city that gives its citizens a capacity to breathe,” she said.

Similarly, Mayor Lagman-Luistro said that a liveable city “is a city you would choose to live in, raise my children and family”. Meanwhile, Mayor Treñas attributed the City of Love’s liveability to their roadmap, and its subsequent fulfillment, for the city.

“Iloilo is a liveable city. We can walk around the Iloilo River, we can go from a mall to another just by biking and we continue to plant trees in Iloilo city. Iloilo is liveable because of plans initiated several years ago,” Mayor Treñas said.

Like any other highly-urbanized city, the three officials had their fair share of challenges in keeping their cities liveable amid the global health crisis. For Mayor Treñas, the lack of resources was the primary challenge, and much like other small cities, moving forward meant borrowing funds and establishing partnerships with the private sector.

Home to a critical population, Mayor Climaco said that Zamboanga’s battle cry was to “feed the hungry and heal the sick”, and let love for their families, the city, themselves, and God be their sources of inspiration.

With communication being the biggest challenge in Tabaco City, Mayor Lagman-Luistro explained the importance of arts in bridging the communication gap and bringing life to the fourth-class city.

“We used arts and music to communicate the health protocols. We used that in public spaces like markets and streets so they will be aware and follow health protocols. We had to redefine urban spaces. What we did was create more wide areas so we can provide open spaces for people to relax and move around. We had the Hiraya Maniwara Park and recycled it to an upcycled park,” she said.

“UNESCO said that we often disregard the economic contribution of arts and culture. This is one of my realizations during the pandemic. We used all of these to create beautiful things.”

Arts also played a vital role in generating work and income in the City of Love, with Ilonggo artists earning a living from painting bridges and creating murals, and paintings being auctioned to pay off local sewers of personal protective equipment.

From an urban planners’ perspective

Ar. Saldaña of PDP Architects lauded the practices and innovations of the three mayors on sustainability, open spaces, health, and infrastructure, and stressed the importance of adopting a people-centered approach.

“Resilient, liveable cities are focused on people. The focus on people also has the focus on wellness, health, and open spaces. I would like to stress the word sustainability—it’s all about design, all about focusing on people,” she said.

Dr. von Einsiedel of Alliance for Safe, Sustainable, and Resilient Environments noted that prioritization is essential when faced with limited resources, adding that health, safety, and wellbeing must be given top priority above anything else.

Ultimately, Mr. Abante of WeSolve Foundation Inc. stressed the importance of shared responsibility between the governors and the governed in responding to crises.

“At the core of our philosophy is that ordinary people have the power to push for change, and leaders that listen empower this change. Listening is important. Bring problem owners to make sure they are part of the problem solution,” he said.

“The power of ordinary people to push for change [and] the power of leaders to listen—that is what we’ve done today.”