The Bureau of Customs (BOC) bagged its third Gold Trailblazer Award as they passed the Proficiency Stage of the Performance Governance System (PGS) last September 3.

The BOC secured the highest PGS award from the Institute for Solidarity in Asia (ISA) during the Public Governance Forum (PGF) Online Revalida and is now one step away from Institutionalization, the fourth and last stage of the PGS. 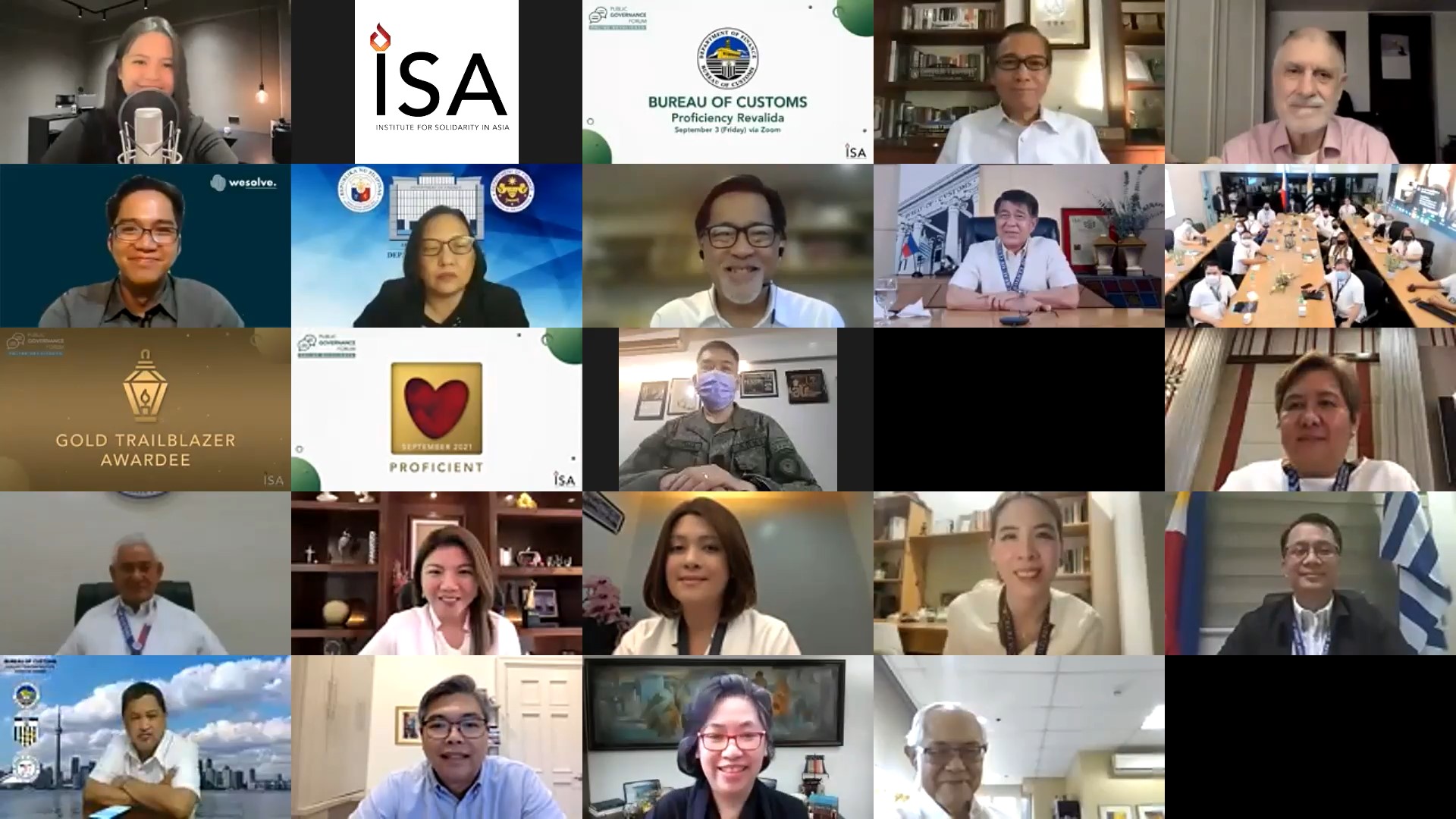 The Online Revalida is a virtual platform under the annual PGF where institutions can showcase their progress and milestones in the PGS pathway, offering a closer look at how each sector demonstrates competency in delivering premium and reliable service to the public.

Customs Commissioner Rey Leonardo B. Guerrero presented the Bureau’s transformation program, starting from his appointment in 2018, the BOC’s gold-standard accomplishment of the Initiation and Compliance Stages, and what it took to transform the organization amid issues and allegations surrounding the Bureau.

The BOC’s Strategy Map is anchored on Automation and Modernization, Good Governance, and Values Transformation. As per Republic Act 10863, the 1,800-strong organization has a three-pronged mandate, namely revenue collection, trade facilitation, and border protection and security.

Commissioner Guerrero noted that the country’s trade facilitation has improved in 2021, as evidenced by our improved ranking and rating in the World Bank: Doing Business Report 2021, Trading Across Borders, the UN Global Survey, among others. He attributed the said achievements to the automation of frontline transitions, a priority program of the Bureau.

“From a baseline of 38% – the BOC has now automated 72.97% or 108 of its 148 external and internal processes. By automating its frontline transactions, the Bureau was not only able to improve trade facilitation but was also able to remove a traditional source of corruption in the agency,” he said.

The Bureau’s streamlined procedures through its Customer Care Centers have also significantly improved customs clearance times, reducing the customs clearance of goods from lodgement of entries to release to only two days and 36 minutes—an improvement from the baseline of two days, ten hours, and three minutes in 2019.

With smuggling as a long-drawn-out stigma attached to the Bureau, Commissioner Guerrero said that the BOC continued to reinforce its anti-smuggling efforts, conducting a total of 615 enforcement operations from January to July 2021, seizing assorted smuggled goods with an estimated value of PHP12.611 billion.

“Meanwhile, our coordinated intelligence and enforcement efforts with the Philippine Drug  Enforcement Agency or PDEA have resulted in the seizure of billions of pesos worth of illegal drugs,” he added.

Apart from the dedication and unshakeable spirit of the men and women behind the Bureau, Commissioner Guerrero credited the success of their transformation program to its Office of Strategy Management (OSM), which has “implemented the game-changing OSM Dashboard”, an interactive tool that allows real-time reporting on the compliance progress of each office.

Mr. Luz and Mr. Abante were particularly impressed by the Bureau’s partnership with the Ateneo School of Government in improving its public data and practices, and sharpening the BOC’s strategy. The members of the council also lauded Commissioner Guerrero for his openness, comprehensiveness, and helping raise the Bureau’s revenue despite the pandemic, thus, earning them a Gold Trailblazer Award.

In preparation for the Institutionalization Stage, which is slated for the 1st Quarter of 2022, the BOC is scheduled to undergo a Strategy Refresh to determine their targets and deliverables beyond 2022 right after their Proficiency Revalida on September 3, 2021.

“This is a testament and recognition of the hard work, dedication, the sweat, and the tears put in by the good men and women of BOC,” he said in his acceptance speech. “With this recognition that you have bestowed to our agency, I would like to assure ISA and all our stakeholders, that everything that we started will be sustained, faithful to our mandate of providing the best service to our people.”