When the pandemic came knocking

As COVID-19 continued to envelope the world in urgency and uncertainty, the Philippine society had to cope, learn, and adapt in the shortest time possible in order to safeguard citizens’ welfare. More than two months of rolling out a national response, different approaches of thoughtful leadership and governance have emerged from across the country. Last June 9, 2020, the Institute for Solidarity in Asia (ISA) invited leaders from the local and national government, and the health sector to talk about the learning experiences that became critical to survival and gradual recovery of the nation. 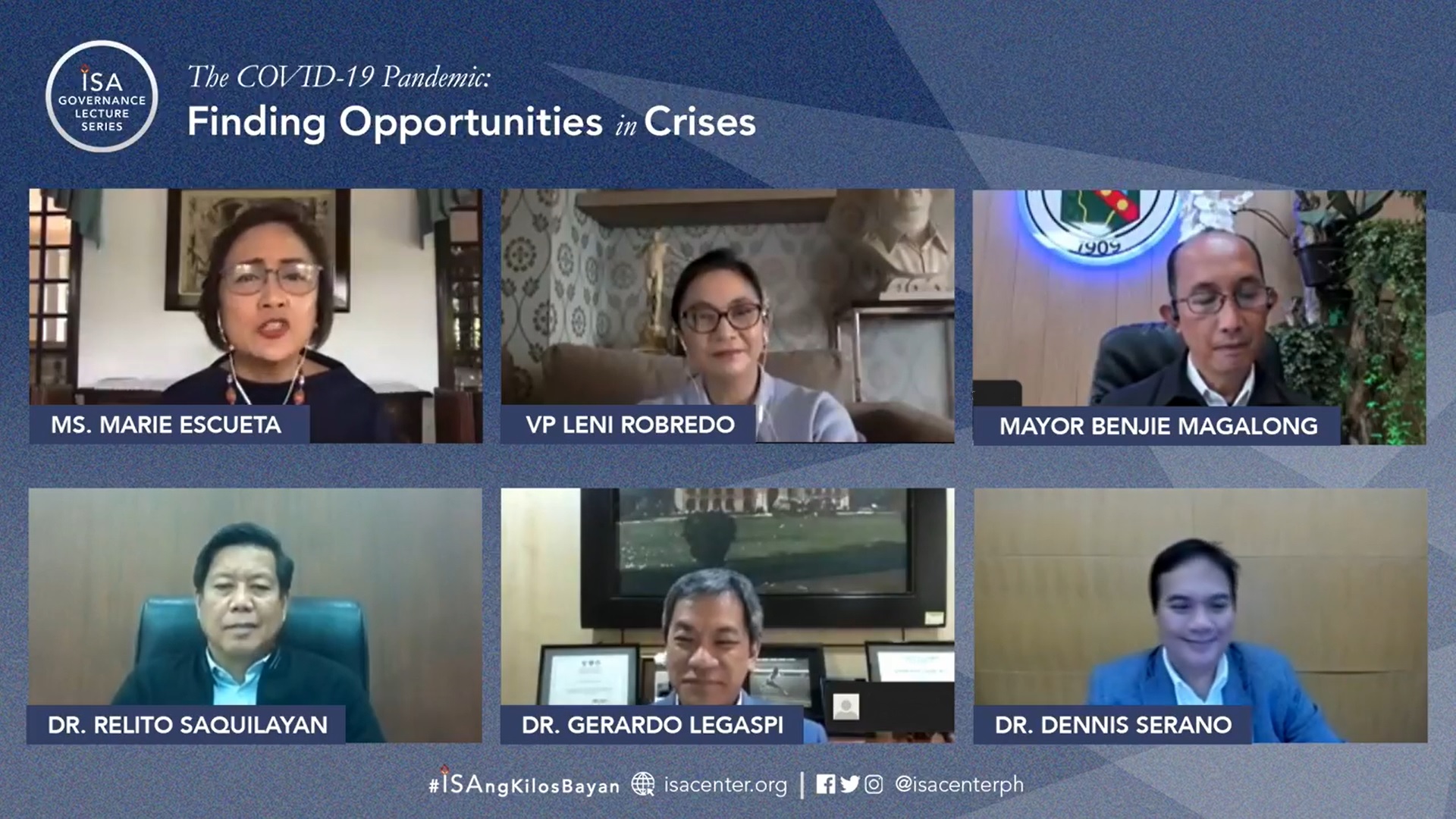 In photo: The speakers and moderator of the 2nd episode of the #ISAngKilosBayan Advocacy Series

The webinar was packed with a three-part discussion among the invited speakers, moderated by ISA Associate Mrs. Marie Escueta. Mrs. Escueta initiated the conversation by first asking the speakers about their individual reactions when the COVID-19 pandemic was starting to gain momentum around the world.

Vice President Robredo shared her deep worries as she realized that China, a country whose healthcare system was more advanced than that of the Philippines, was already struggling to contain the spread of the disease.

“I remember feeling really frustrated when there was a lot of tentativeness to impose travel restrictions despite the examples set by some of our neighboring countries,” said the Vice President.

Her sentiments were echoed by Mayor Magalong, who was also closely monitoring the initial responses of other countries in providing safety measures. He shared how, upon examination of their contingency plans, there were no appropriate references as to dealing with this kind of issue. Once they were able to gather and organize among the local government, their primary decision was to suspend all crowd-drawing events. This, according to the local chief executive, was a widely unpopular decision. 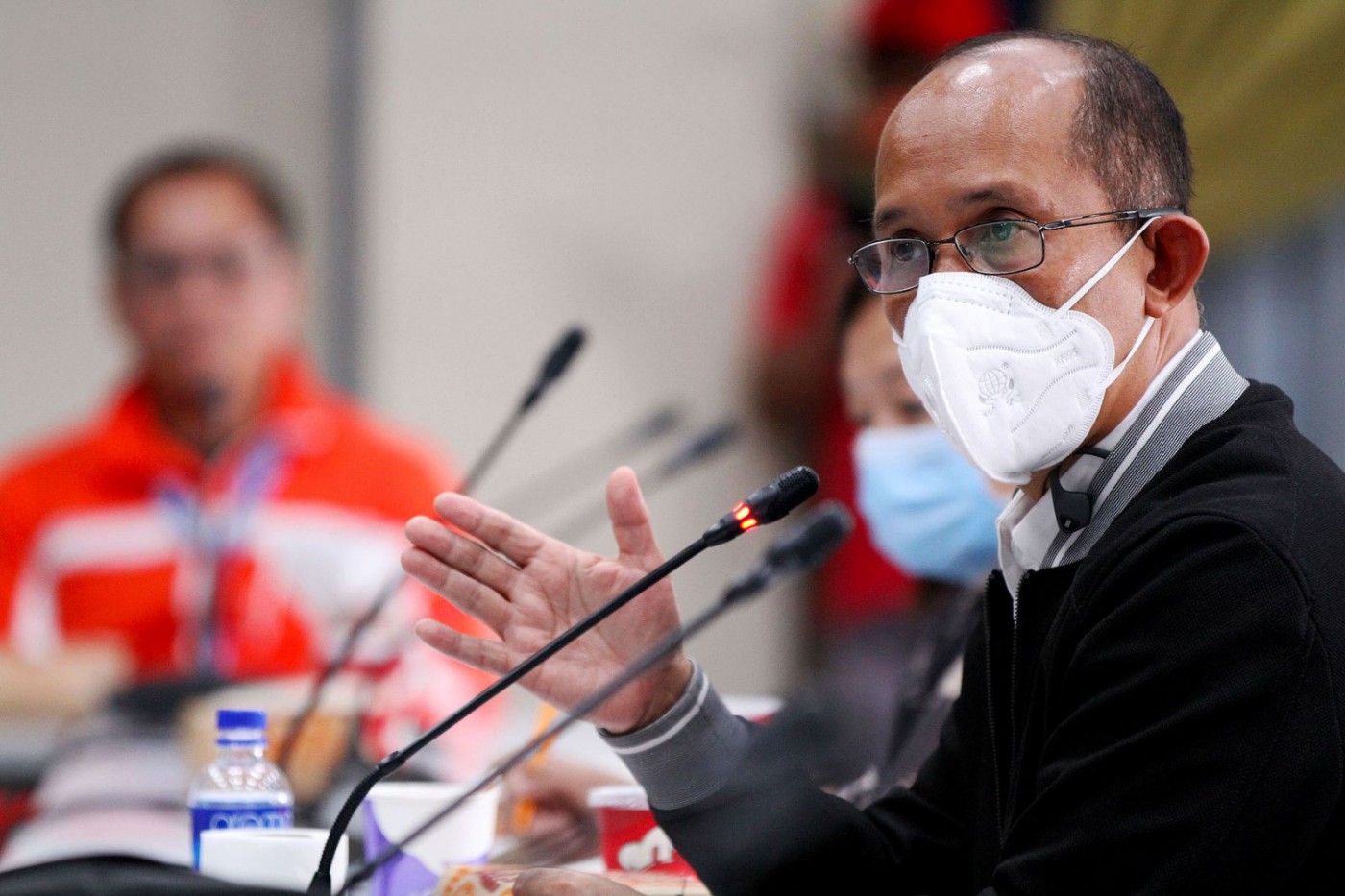 “It’s a huge challenge. I knew it would become an unpopular decision but I had to do it,” recalled Mayor Magalong. “The first thing that came to mind was, ‘How would the people react? What will happen to our economy?’”

Unpopular though it was, Mayor Magalong later realized that it was the right move, given the rate at which the COVID-19 disease was spreading.

Over at the health sector, hospital officials were facing challenges with operations, logistics, and infection, all at the same time. In PGH, Dr. Legaspi shared how he initially worried about compromising the magnitude of the operations of the hospital. However, proactive decision-making was urgently needed in anticipation of the rising cases.

“As any leader should do here, we were reading the signs. Private hospitals were getting swamped already and it was a matter of time before the public hospitals got their share of patients. The biggest mistake that anyone can do at the time was to try to maintain normalcy,” stated the PGH Director.

When the pandemic came knocking, the challenges of the health sector grew. According to PGH COVID-19 Crisis Team Logistics Coordinator Dr. Serrano, physicians needed to do two things at once: study the behavior of the virus in order to treat it, and study the administrative response to dealing with the spread.

Major decisions were being coordinated and communicated within hospitals at such a fast pace that even RMC Director Dr. Saquilayan himself contracted the disease during the early weeks of the pandemic. 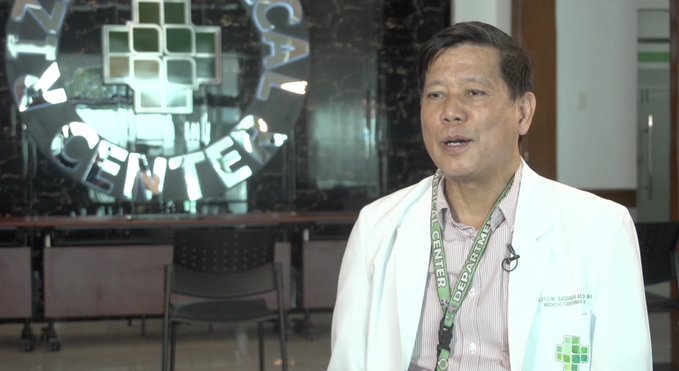 This reality that frontliners were the most vulnerable to COVID-19 made more urgent and necessary the protection of health workers. As hospitals communicated their logistical needs to the public, government agencies, private enterprises, and civil society began mobilizing different forms of assistance dedicated to providing the needs of frontliners, including Personal Protective Equipment (PPEs).

“We were able to do so much by collaborating with many different groups. Supplies were scarce so we partnered with local designers and shifted [to] local production [of PPEs]. In the process, we were able to give employment to poor communities because we asked them to sew these [PPEs],” shared Vice President Robredo. Their office not only arranged for PPE supplies but also provided transportation and dormitories for stranded health workers.

In photos (courtesy of VP Leni Robredo Facebook Page): COVID-19 initiatives led by the Office of the Vice President

Such was the type of agile response that was sorely required as the COVID-19 pandemic escalated. For Mayor Magalong, reestablishing control was key to crisis response, along with maximizing the use of technology to power thorough contact tracing within cities. In addition to those, he emphasized the importance of communicating with stakeholders.

“We need to let people know what is going to happen and where our direction is. The people should know this so they won’t feel a sense of uncertainty,” advised Mayor Magalong.

Similarly, external communication was what allowed PGH to bring structure to chaos when the surge of donations started coming in.

“In the beginning there was chaos. Some of the donations, we couldn’t use. We could not compromise the safety of our frontliners. It helped when we started communicating and directing the donors so that we did not waste donations,” recalled Dr. Serrano.

RMC also utilized its links to external stakeholders, primarily through the Multi-Sector Governance Council (MSGC) stipulated in ISA’s Performance Governance System (PGS) Program. Constant coordination with the MSGC helped the hospital fill in the gaps and strengthen their crisis response.

Every step of the way

Equally crucial for these leaders was Internal Communication, especially as the local and national government had to sustain wide-scale operations, while the health sector had to deal with life-and-death situations daily.

Vice President Robredo reflected on the role that leadership presence and visibility played in keeping volunteers and staff engaged. She said, “It gives the team a sense of comfort that even if things are difficult, we are with them. It is very important that your team recognizes that you are with them every step of the way from start to finish.”

On the other hand, with recurrent news of deaths and losses, the doctors expressed the difficulty in boosting morale among the staff, as there was barely any time to grieve for fellow doctors while maintaining the capacity of the hospital.

“[News of death] really hits close to home. Everyone commiserates with the family but it was subconsciously something we needed to block out because it would affect how we would go on for the rest of the day. People in the Crisis Team were becoming COVID-positive and it’s something you need to be able to cope with every day. What kept us going was the dedication of these frontliners. You cannot just abandon them in terms of providing what they need, in terms of looking out for them,” stated Dr. Serrano. 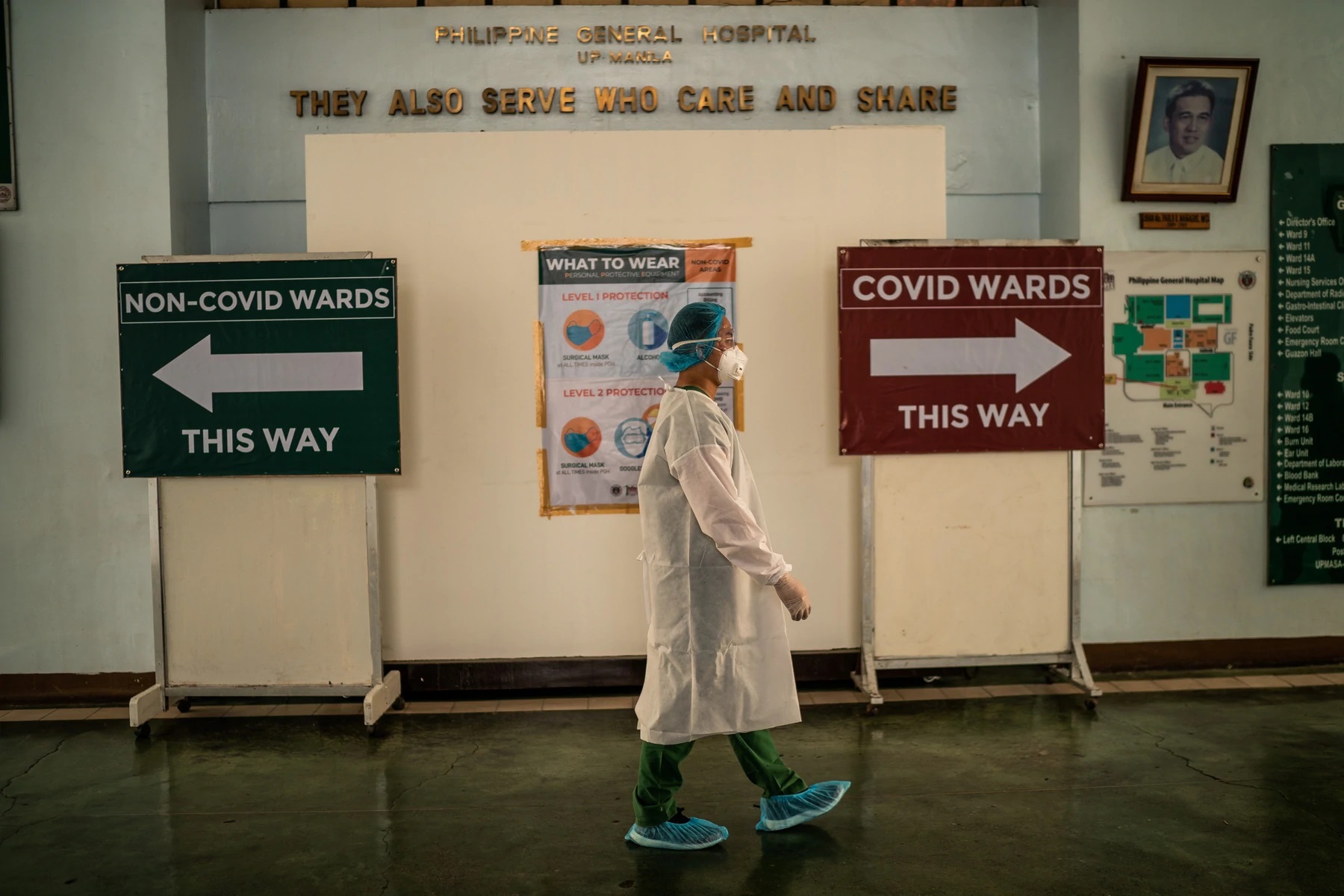 In photo (courtesy of The Washington Post): The COVID-19 and non-COVID wards of the Philippine General Hospital

As the Philippine society has now regained a little more footing in this situation, many opportunities have emerged for the government and health sector, drawn from the learnings during the pandemic.

Having observed the fast shift to digital learning and digitalization of business operations, Mayor Magalong now sees that the next move of the government and its agencies should be to pursue a wide digitalization program, making sure that there is assistance for marginalized sectors who are financially challenged and cannot keep up with the shift.

The same vision is what Vice President Robredo echoes for the areas who have more limited resources compared to others. Having seen the impact and reach of public-private partnerships, she also hopes for a better way of doing things as the nation emerges from this crisis.

As for hospitals, the next endeavor that would be crucial, according to Dr. Legaspi, is to look into Infectious Disease Control, so as to prevent another massive health crisis like COVID-19 from overwhelming the public health system

Though the road to overcoming the pandemic and all the blows it dealt to the nation is long, the Philippine society is not without its strength. If only we can learn, act, and move forward as one nation, we can get to a better normal, without any Filipino left behind.

View the full webinar episode on our Facebook page.